Shopping Cart
Your Cart is Empty
Quantity:
Subtotal
Taxes
Shipping
Total
There was an error with PayPalClick here to try again

Thank you for your business!You should be receiving an order confirmation from Paypal shortly.Exit Shopping Cart

What really happened at Kent State?

The 1960s and '70s were tumultuous times in the United States. The country was fighting an unpopular war in Vietnam that was instigating a wave of protests. In 1970, tensions came to a fever pitch when tragedy struck on one college campus. On May 4, members of the Ohio National Guard shot into a crowd of antiwar protestors at Kent State University, killing four students and wounding nine.

To understand the context of the tension, let's sum up the background on the war. Vietnam, which had recently fought for its independence from France in the 1940s and '50s, had split into the Communist North (Viet Cong) and non-Communist South, which sought a more democratic government. The United States had gradually increased its support for South Vietnam in order to prevent Communism from spreading in Asia. Richard Nixon won the 1968 presidential election based partly on his promise of Vietnamization -- transferring combat duties from U.S. soldiers to the South Vietnamese.

On April 30, 1970, President Nixon seemed to be betraying such promises about reducing U.S. involvement in the war when he announced that he sent troops into Cambodia, where the Viet Cong had its headquarters. Opponents of the war interpreted Nixon's announcement as a step backward, and it immediately prompted antiwar protests across the country, especially on college campuses.

Kent State University in Kent, Ohio, was one such campus where tense protests were held. The campus was a relatively unlikely setting for the dramatic events that unfolded over the span of four days leading up to the tragedy. Compared to nearby Ohio State University, the Kent State student body was generally less liberal and more blue-collar [source: Lytle]. However, it's thought that outside agitators helped escalate the violence and intensity of the protests.

As protests became more heated, the Ohio National Guard was summoned to Kent. These guardsmen became the center of the controversy for their decision to fire into the crowd. Many of these young men were no older than the student protesters and had joined the Guard in order to dodge the draft.

But the real story of what happened at Kent State begins a few days before the tragic shootings took place. It begins on Friday, May 1 -- the day after President Nixon made his announcement about sending troops into Cambodia.
http://history.howstuffworks.com/history-vs-myth/kent-state.htm/printable

This image dramatically condemns the brutal racism of some white Southerners against blacks. The white man has killed a black child, and his plea of "self-defense" exemplifies the perspective among Southern whites that Reconstruction had led to "black rule." The cartoon appeared just a few weeks before the presidential election.

Cartoonist: A. B. Frost

This Day In History, Dec. 14, 1917 Kate Richards O'Hare was sentenced to five years�?? imprisonment for a speech denouncing WWI

On Dec. 14, 1917, U.S. peace activist and suffragist Kate Richards O'Hare was sentenced to five years’ imprisonment for a speech denouncing WWI. Occupying a neighboring jail cell was Emma Goldman, the well-known anarchist organizer, feminist, writer and anti-war critic who was imprisoned for obstructing the draft. O'Hare was one of a number of prisoners Socialist Party leader Eugene V. Debs cited in his "Canton Speech" for which he in turn was imprisoned. He said: "The other day they sentenced Kate Richards O'Hare to the penitentiary for five years. The United States, under plutocratic rule, is the only country that would send a woman to prison for five years for exercising the right of free speech." Read more about her life and work: http://womhist.alexanderstreet.com/kro/intro.htm For a reading of Debs' speech from Voices of a People's History of the United States, see: http://zinnedproject.org/posts/11179 Image: Kate Richards O'Hare addresses crowd in front of the St. Louis Court House on National Women's Suffrage Day, 2 May 1914. Photograph by the St. Louis Times, 1914. Missouri History Museum 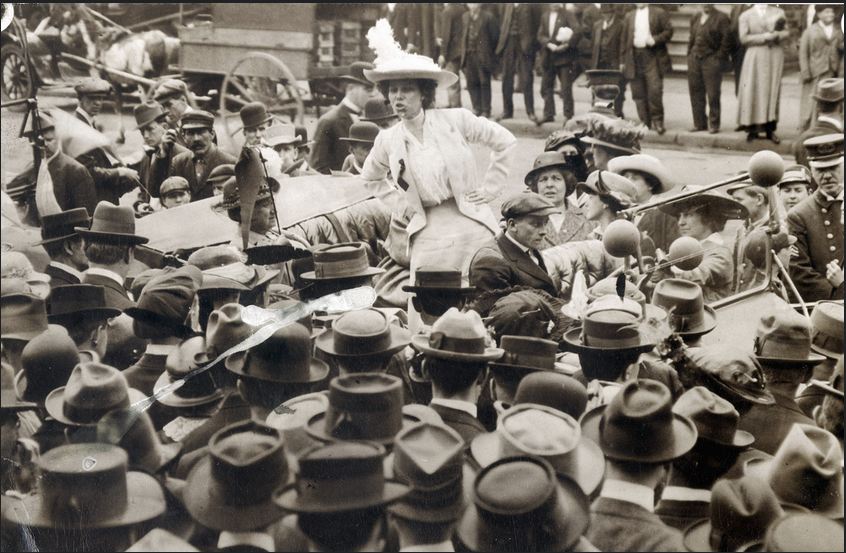 This Day in History: The United States Declares War on Japan

On December 8, 1941 the United States Congress declared war upon the Empire of Japan in response to that country's surprise attack on Pearl Harbor the prior day. It was formulated an hour after the Infamy Speech presidential address of Franklin D. Roosevelt. Following the declaration, Japan's allies, Germany and Italy, declared war on the United States, definitively bringing the United States into World War II.

The attack on Pearl Harbor took place before any formal declaration of war was made by Japan, but this was not the intent of the Japanese high command. It was originally stipulated that the attack should not commence until thirty minutes after Japan had informed the United States that it was withdrawing from further peace negotiations.It was the intent of the Japanese to uphold the conventions of war while still achieving surprise, but the attack began before the notice could be delivered. Tokyo transmitted the 5,000-word notification (commonly called the "14-Part Message") in two blocks to the Japanese Embassy in Washington. However, transcription took too long for the ambassador to deliver it in time. Even so, the notification was worded so that it actually neither declared war nor severed diplomatic relations.

President Roosevelt formally requested the declaration in his Infamy Speech, addressed to a joint session of Congress and the nation at 12:30 pm on December 8.

The declaration was quickly brought to a vote; it passed the Senate, and then passed the House at 1:10 pm.[6] The vote was 82 to 0 in the Senate and 388 to 1 in the House of Representatives. Jeannette Rankin, a committed Pacifist and the first woman elected to Congress (first elected in 1916), was the only vote against the Declaration in either house, while the other nine women voted for the declaration of war.

President Roosevelt signed the declaration at 4:10 pm the same day. The power to declare war is assigned exclusively to Congress in the United States Constitution, and it was therefore an open question at the time whether his signature was technically necessary.[6] However, his signature was symbolically powerful and resolved any doubts.

JOINT RESOLUTION Declaring that a state of war exists between the Imperial Government of Japan and the Government and the people of the United States and making provisions to prosecute the same.

Whereas the Imperial Government of Japan has committed unprovoked acts of war against the Government and the people of the United States of America:

John Lennon, a former member of the Beatles, the rock group that transformed popular music in the 1960s, is shot and killed by an obsessed fan in New York City. The 40-year-old artist was entering his luxury Manhattan apartment building when Mark David Chapman shot him four times at close range with a .38-caliber revolver. Lennon, bleeding profusely, was rushed to the hospital but died en route. Chapman had received an autograph from Lennon earlier in the day and voluntarily remained at the scene of the shooting until he was arrested by police. For a week, hundreds of bereaved fans kept a vigil outside the Dakota--Lennon's apartment building--and demonstrations of mourning were held around the world.

John Lennon was one half of the singing-songwriting team that made the Beatles the most popular musical group of the 20th century. The other band leader was Paul McCartney, but the rest of the quartet--George Harrison and Ringo Starr--sometimes penned and sang their own songs as well. Hailing from Liverpool, England, and influenced by early American rock and roll, the Beatles took Britain by storm in 1963 with the single "Please Please Me." "Beatlemania" spread to the United States in 1964 with the release of "I Want to Hold Your Hand," followed by a sensational U.S. tour. With youth poised to break away from the culturally rigid landscape of the 1950s, the "Fab Four," with their exuberant music and good-natured rebellion, were the perfect catalyst for the shift.

The Beatles sold millions of records and starred in hit movies such as A Hard Day's Night (1964). Their live performances were near riots, with teenage girls screaming and fainting as their boyfriends nodded along to the catchy pop songs. In 1966, the Beatles gave up touring to concentrate on their innovative studio recordings, such as 1967's Sgt. Pepper's Lonely Heart's Club Band, a psychedelic concept album that is regarded as a masterpiece of popular music. The Beatles' music remained relevant to youth throughout the great cultural shifts of the 1960s, and critics of all ages acknowledged the songwriting genius of the Lennon-McCartney team.

Lennon was considered the intellectual Beatle and certainly was the most outspoken of the four. He caused a major controversy in 1966 when he declared that the Beatles were "more popular than Jesus," prompting mass burnings of Beatles' records in the American Bible Belt. He later became an anti-war activist and flirted with communism in the lyrics of solo hits like "Imagine," recorded after the Beatles disbanded in 1970. In 1975, Lennon dropped out of the music business to spend more time with his Japanese-born wife, Yoko Ono, and their son, Sean. In 1980, he made a comeback with Double-Fantasy, a critically acclaimed album that celebrated his love for Yoko and featured songs written by her.

On December 8, 1980, their peaceful domestic life on New York's Upper West Side was shattered by 25-year-old Mark David Chapman. Psychiatrists deemed Chapman a borderline psychotic. He was instructed to plead insanity, but instead he pleaded guilty to murder. He was sentenced to 20 years to life. In 2000, New York State prison officials denied Chapman a parole hearing, telling him that his "vicious and violent act was apparently fueled by your need to be acknowledged." He remains behind bars at Attica Prison in New York State.

John Lennon is memorialized in "Strawberry Fields," a section of Central Park across the street from the Dakota that Yoko Ono landscaped in honor of her husband. 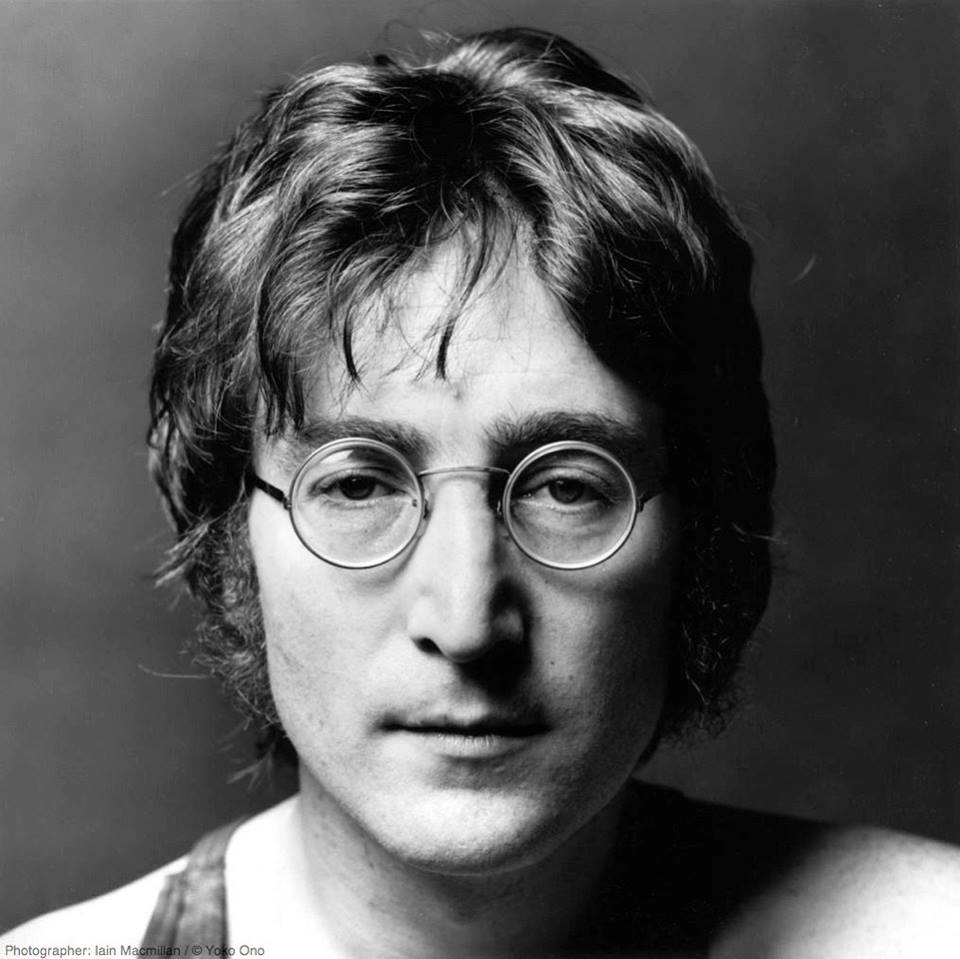